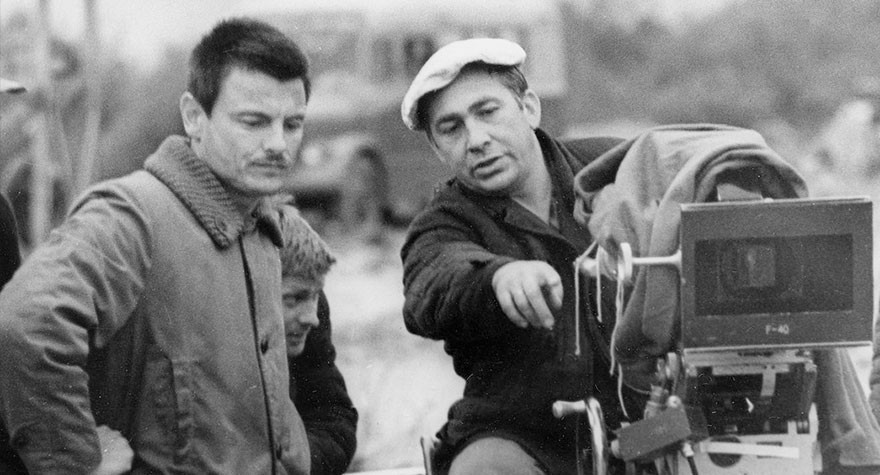 AZ Museum, “Two Andreys” Foundation and New Space of the Theatre of Nations present exhibition “Breakthrough into the past. Tarkovsky & Plavlinsky” under the umbrella of the XXXIX Moscow Film Festival.

In the year of the 50th anniversary of “Andrei Rublev” film exhibition curator Polina Lobachevskaya has brought together the two prominent artists of the XX century: Andrei Tarkovsky and Andrey Plavlinsky.

The two artists – Tarkovsky and Plavlinsky – in fact never met each other.  However, their creative endeavors led them both in similar directions. Both were fascinated by the aesthetics of the Orthodox icon as an embodiment of the Christian world view, and as a path to artistic perfection and self-understanding. Andrei Tarkovsky shot “Andrei Rublev” in Izborsk, Suzdal and Vladimir. At about the same time, Dmitri Plavinsky travelled through the Russian North and worked in a church in Izborsk.

“Breakthrough into the Past”  multimedia project  features 15 paintings and etchings by Dmitri Plavinsky from the AZ Museum and private collections, as well as unique documents, photographs and videos from the archives of Irma Raush-Tarkovskaya, Pavel Safonov and Mikhail Romm (courtesy of the Two Andreys Foundation) and the archives of Vadim Yusov, Savva Yamshchikov and Alexander Mstislavsky.

The project is accompanied by a course of cinematic lectures “Two Andreys. The inner circle” and a program “Around Tarkovsky” featuring screenings of a unabridged version of  ”Andrei Rublev” and other cinema masterpieces. The lectures and the screenings are scheduled every Tuesday, Thursday amd Sunday, admission free of charge to both.

New Space of the Theatre of Nations is located at: 12, Strastnoy blvd.

AZ Museum is the only private Moscow museum dedicated solely to one artist – prominent painter of the XX century Anatoly Zverev. The museum opened its doors on 27 May 2015. General director – Natalia Opaleva. Art director: Polina Lobachevskaya.

“Two Andreys” Foundation is a non-profit organization dedicated to support of cultural and cinematic initiatives. It was created in 2015. General director – Vyacheslav Shmyrov.