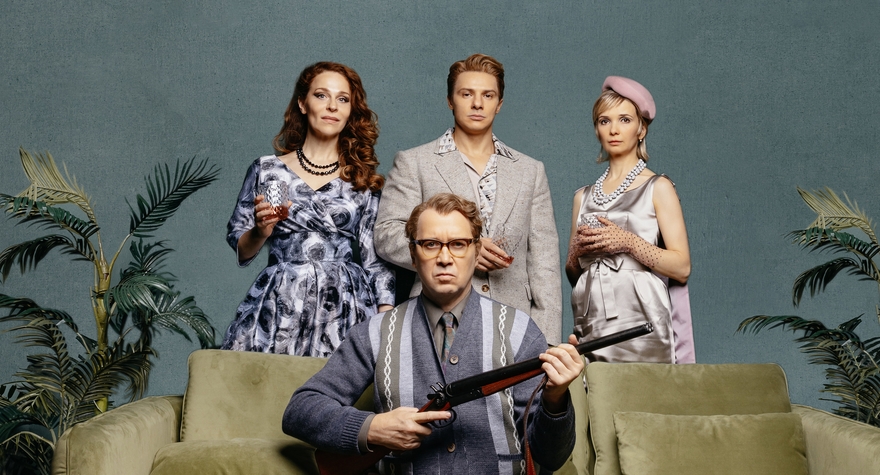 Who's Afraid of Virginia Woolf? is a play by three-time Pulitzer Prize winner Edward Albee. The master of absurd dramaturgy created a psychological drama that became an absolute hit on Broadway in the sixties (Tony Award for Best Play in 1963) and is still one of the most staged plays. The film based on the plot starring Richard Burton and Elizabeth Taylor in the lead roles, won five Oscars.

George and Martha are a venerable if oddball professorial couple with family ties in the administration of a college in the northeastern United States. Their nightly guests are Nick, a young biology teacher, and his wife Honey, they find themselves in an ethical trap becoming unwitting participants in a series of disgusting family scenes. The confused logic of a drunken aggressive conversation leads each of the characters to one’s personal existential experiences. The night is still young and there is still an abundance of whiskey to be consumed, which will lead to mutual accusations, adultery, a shot and the revelation of a frightening secret.

“The characters of the play are trying to excite themselves, bring themselves to life, reanimate their relationships and prevent their feelings from atrophying”, – says director Danil Chashchin. – “But where is the red line here? After all, if one does not stop timely, it can lead to fatal consequences. The actions of Martha and George resemble the behavior of porcupines, who huddle together to keep warm from the cold, but at the same time kill each other with their thorns.”

Who's Afraid of Virginia Woolf? is Danil Chashchin's second production at the Theatre of Nations. The first one – Living T. – was staged in 2021. “Unlike Living T. this performance will not rely on plethora of directorial ideas, – says Chashchin. – This is a play in which the main attraction is the interaction of the actors with each other. And the cast is excellent.” The part of George is played by People's Artist of Russia Evgeny Mironov, the part of Martha is played by Honored Artist of Russia Agrippina Steklova. The parts of Nick and Honey are played by Alexander Novin and Maria Smolnikova.

We are grateful to Dana Khamitova and Irina Gross for their help and advice.