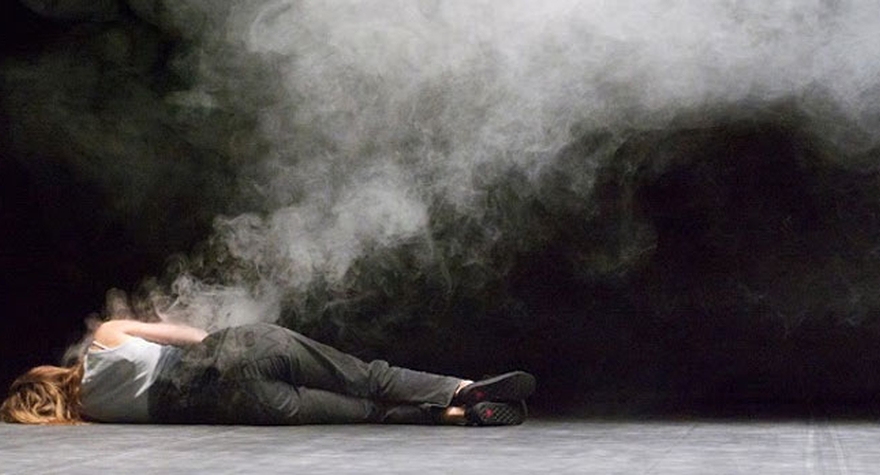 Referring to "sfumato", pictorial technique defined as "without lines nor outlines, like the smoke", Rachid Ouramdane conceived a series of blurred paintings were the borders of bodies dilute. Performers, who move in landscapes of mists and rains, offer a metaphoric vision of ecological contemporary issues: disappearance of territories, exile in unknown places and memories of its witnesses. A new way for the choreographer to pursue his poetic of testimony, led in association with author Sonia Chiambretto and composer Jean-Baptiste Julien.

“Short Taiga” text by Sonia Chiamberto is used in the performance

“Sfumato” begins with a cloud of smoke and two silhouettes coming out of it. Is it the morning mist? Is it the urban pollution? This is a fascinating picture – the first from the series. For an hour and ten minutes the stage turns into a plastic installation. Still the silent unease works its way through this fog bank (or rain drops hanging in the air) that shields the unattended world from our eyes.

Working on such popular theme of ecologic refugees for the first time, Rachid Ouramdane adds “Sfumato” to the series of performances based on understanding of reality through choreography:“Far…” and “Ordinary witnesses.” The choreograph works with a wide range of dance’s recourses: fine made ensemble compositions, step dance and even more surprisingly pas de deux. The performers like Jean-Baptiste André who incorporates inventiveness of new circus into the show are of vital importance as well.

The sounds of piano together with the ring of voice are hearing from afar. And the humdrum of words: Rachid Ouramdane makes it clear that narrative is not his thing. The creation of characters is not so much important as the creation of a mind-challenging atmosphere. Sonia Chiamberto, the author of the text, made up this sound material from the ecological refugees’ of the 21st century words and reminiscences.
Les Inrocks appendix, Philippe Noisette

The first thing that comes to mind when speaking of this performance is its strong opening scene. A woman recites extract from Sonia Chiamberto’s “Short Taiga” (La Taïga Court). The public is seized with dismay from the very first minutes of the show: wavy breath, drumming rhythm of the voice, the narration gaining momentum; it is a narration about misfortune. All the senses are subtle, we trying to see in the darkness and capture the slightest movement hoping that would take off the tension created by the text. The lights switch on revealing two figures standing still: the man is sitting his back to the audience with his head tilted, the woman is lying on the edge of the stage and turns suddenly her back to the audience. The black piano is standing to the right. The inflictions of their bodies slowly emerge from the white fog fighting the space so that they fill it all with their presence. The fog spends itself during recitation of the text and we are watching how it starts its hectic movement again. Then the bright fog gets mixed with the toxic dark smoke… The unease strikes again.

The movement starts with Lora Joudkaite’s fascinating whirl. She is like a thin reed put in the mercy of the pitiless winds; she does one and the same terrifying spiral speeding up till oblivion every time. She is just like a wind vane in the eye of the storm. One recalls the Sandy hurricane – another symptom of climatic accidents. The show evolves wave by wave: the moments of calm grow into acceleration and back again, so the anxious feeling that you felt right at the beginning never stops haunting you. So that the only you can do is giving yourself up to the dramatic beauty of interchanging images.
Toute la culture, Géraldine Bretault