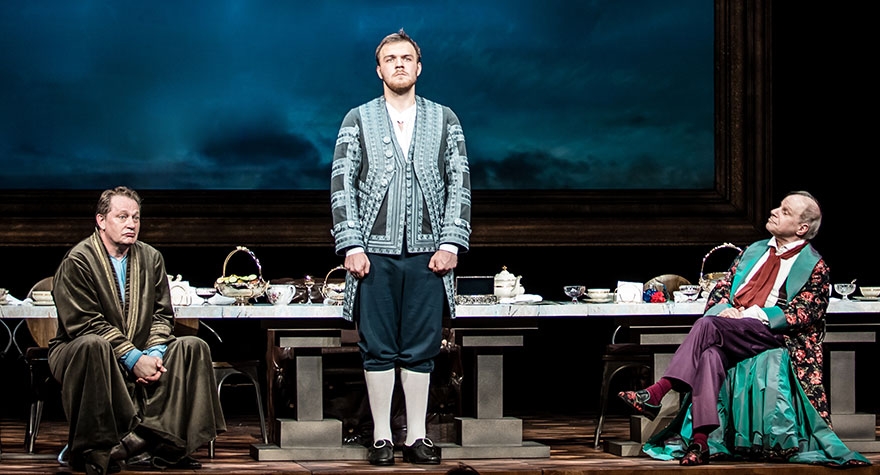 Unwashed household members in slippers and dressing gowns are present at breakfast at the landowner's Yegor Rostanev's, continuing yesterday's supper, one that smoothly flows out of the day before yesterday's dinner. Among them is Foma Fomich Opiskin, who previously served as a jester in the house of Rostanev and now wants to establish his own rules here. The owner obeys him with pleasure and fanaticism.

The Passion after Foma is a work by the multiple nominee and holder of two Golden Mask awards, director Evgeny Marcelli, who has staged more than 60 performances throughout Russia. This is his second performance on the stage of the Theater of Nations after STORM STORM with Julia Peresild in the title role.

This time Marcelli was inspired by Fyodor Dostoevsky's story The Village of Stepanchikovo and Its Inhabitants, which written by the classic in Semipalatinsk, where he was exiled after hard labor in the Omsk prison. The work became popular only after the death of the writer, but the name of the protagonist Foma Fomich Opiskin has since become a household name. People's Artist of Russia Avangard Leontyev will play his part in the production The Passion after Foma.

“As soon as Evgeny Mironov said the name of Avangard Leontyev, I realized that this hit the top ten: in the image, type, my own perception of the character,” - says Evgeny Marcelli. - I am usually afraid to work with directors, teachers (and Avangard Nikolaevich is both a director and a teacher), I am afraid that they will impose my vision on me. But he is a very sensitive, attentively listening actor. And I really like it."

People's Artist of Russia Olga Volkova and Honored Artists of Russia Vitaly Kishchenko and Anastasia Svetlova were also invited to participate in the performance. With the help of this outstanding acting ensemble, the director will tell this completely illogical, but very characteristic of the Russian mentality story: when one petty tyrant subjugates intelligent people (not to mention stupid ones), plunging them into a constant, fierce war. But if the hostilities subside, then the lifes of the characters - both tyrants and victims - lose all meaning.

“I want the viewer to gasp: ah, this is a story about me! - says Marcelli, - yes, it's me. Why do I obey? What for? I do not know how to fight, I do not know how to win, and if I do win, then in five minutes I regret that I do. This is such a feeling of endless guilt, that can not be explained in words. This is the main magnet for me. After all, get them all a psychologist or a psychoanalyst - and everything is lost! There will be a diagnosis, but there will be no play!"