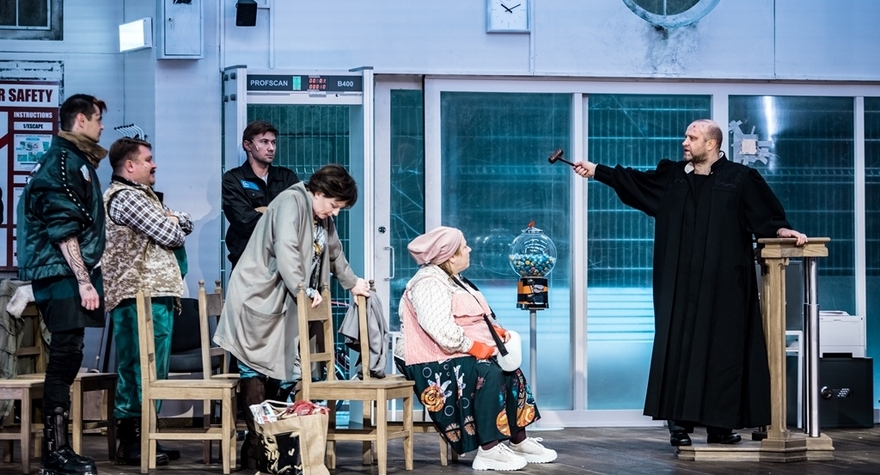 The play by Heinrich von Kleist, The Broken Jug was included in the golden fund of the German theater. The almost Gogolian inspector Walter comes to a Dutch village of the late 18th century, and Judge Adam has to try a case, where he himself is the main perpetrator of a crime. Elena Morozova plays the part of the inspector. Such a shape-shifter has a special meaning because the performance takes place in a small European town in the present (rather in the future) where such a thing as third gender lawfully exists. One of a person who does not feel like a man or a woman. And so, such an "advanced" representative from Brussels, a major official, comes to a small town to see how justice is done."

The dialogues written by Kleist more than two hundred years ago seem to be absolutely topical and acutely social: anyone can twist and turn the law in any way. Problems in the judicial system remain the same and they have hardly changed over the past centuries. Kleist's characters are so alive that many recognize themselves in them. So, at the end of the 30s of the XXth century, the Minister of Propaganda of the Third Reich, Joseph Goebbels, saw in the image of the roguish judge Adam a caricature of himself (all the more, Goebbels limped, like Adam in a comedy). In this regard, he banned the 1937 German film starring Emil Jannings. Graceful dialogues translated by Boris Pasternak and Fyodor Sologub, situations that are comical in their essence, and brilliant actors will undoubtedly make the audience laugh as well as make them think about the connection of times in the ever-living classics.