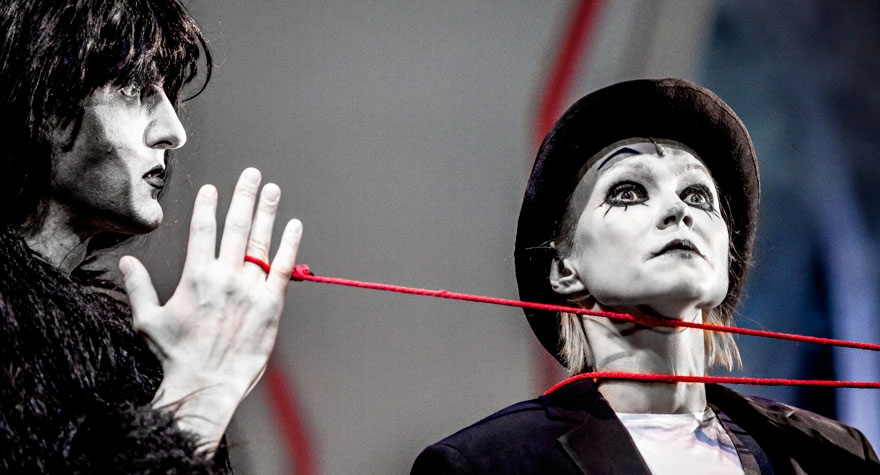 Director Maxim Didenko, three times the nominee of the Golden Mask, who released the performances of Konarmia (Dmitry Brusnikin's course at the Moscow Art Theater School) and "Harms. Myr" (Gogol Center) staged "The Idiot" based on the novel of Dostoevsky of the same name.

Even though there are 20 charachters in Konstantine Fyodorov's scenic version of the novel, only four actors are engaged in the perfomance - alongside with breathtaking Ingeborga Dapkūnaitė, who plays the part of Prince Myshkin, the show stars Evgeny Tkachuk, Pavel Chinaryov and Roman Shalyapin. The director sets himself a puzzling task of staging "The Idiot" in the aesthetics of "noir" clownery. He states that "among all the other, there are two things in our world that got lost: the culture of clownery and the perception of Dostoevsky as a living human being full of irony'. The story will unfold in the space created by designer Pavel Semchnko from the 'AXE' theatre; he often exploits complex video-mapping techniques in interaction with real objects.

Maxim Didenko brings into the limelight the novel's romance triangle 'Myshkin - Nastassya Filipovna - Rogozhin' and all those extraordinary events we often overlook, being too preoccupied with the 'accursed questions' and dead-ends of the novel.

In 2016, the performance was shown on the New Stage of the Alexandrinsky Theater in the off-program of the Breakthrough Festival in St. Petersburg.