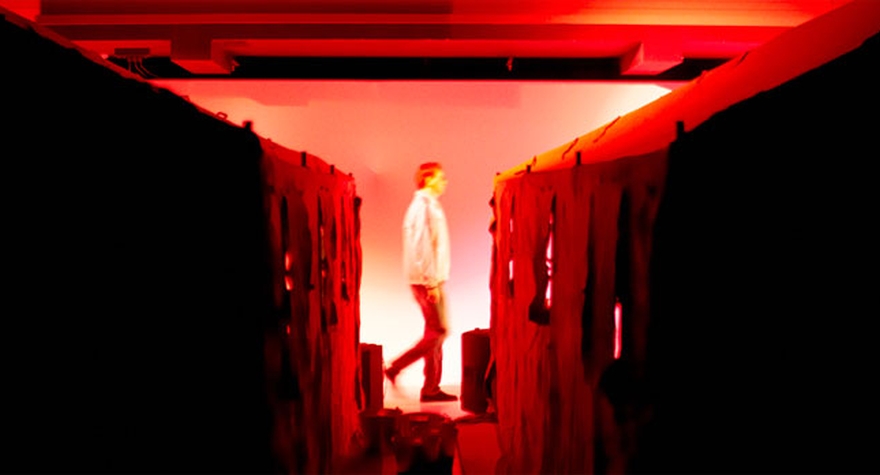 "What I wanted was to write a text about poor planning, poor economy spoiling people's lives," says the playwright. Earlier Pryazhko avoided direct statements about his country and society, and this is the first time he dared to speak at large about it. But Dmitry Volkostrelov and Ksenia Peretrukhina, who created a performance based on his new play, do not emphasize these social issues. Three Days in Hell at the Theatre of Nations can hardly be called "a staging of the play", as the text by Pavel Pryazhko becomes more likely a part of a total installation where the audience is drawn into. While keeping the whole text of the play, the authors create an environment where each viewer is forced to interpret in his own way what is going on around during the performance. At the entrance to the hall the public is divided into three groups, with each group placed in a tent like those in which patients of the compulsory treatment institution near Minsk live, as the inhumane conditions of the occupational therapy rehabilitation centre are mentioned in Pryazhko’s text. But Volkostrelov and Peretrukhina created this space not only as a text reference. According to their idea, the action that people see in one tent slips away from the others, and each viewer is watching only one version of the play out of three available. It is a recurrent Volkostrelov’s technique: in Three Four opera production (an opera by Boris Filanovsky, libretto by Lev Rubinstein), and in The Delhi Dance (based on the play by Ivan Vyrypaev) he divides the public between two halls, so that what is happening in the next room can be seen only by the video broadcasting; in Shoot-Get Treasure-Repeat (a production based on the cycle of plays by Mark Ravenhill) two episodes are shown in the museum's spaces every half an hour, and visitors are free to compose their own itinerary (full visit of this "museum of 16 plays”, as the project is referred to by its director himself, would take 8 hours). All these Volkostrelov’s performances imply multiple view points, and the random selection of the public plays here the same role of a professional montage in cinema.

According to its director, Three Days in Hell will be made up of independent, self-contained fragments; the play will be transmitted in audio recordings (voiced by the actors Igor Gordin, Daria Yekamasova, Arina Marakulina, Yulia Volkova, and others). The actors Alexander Userdin and Pavel Chinarev, existing in the performance’s space, are not portraying any characters. Their existence on stage is reduced to simple physical actions; it is only in the public’s minds that these are supposed to build up a performance. Perhaps it is only in the contemporary art galleries and video games that all that public sees so obviously depends on its own actions and movements. The public is the highest authority, and it is only thanks to it that art elements constitute a whole: this is what modern art and the whole Volkostrelov’s theatre are based on. And the same is true for Three Days in Hell.