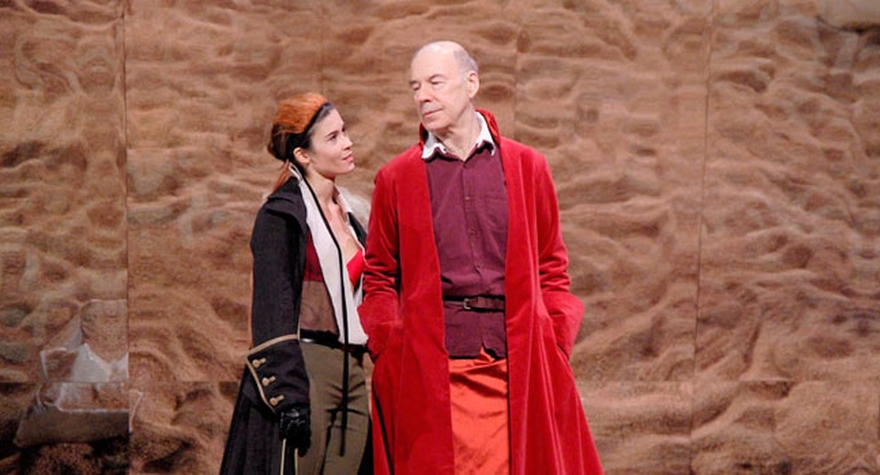 “The Triumph of Love” by Pierre Carlet de Chamblain de Marivaux is one of the most exquisite, witty and perfect comedies of French Enlightenment. The intricate storyline spurred by love affair, histrionics, cross-dressing, deception, sham and Marivaux’s trademark splendid dialogues made this play a tidbit for many directors and actors. Acting in “The Triumph of Love” in Paris were great Jean Vilar and Maria Casarès;

This “purely French” comedy was adapted for the Moscow stage Bulgarian director Galin Stoev renowned among other things for his sensational staging of “The Triumph of Love” at la Comédie-Francaise. The co-authors of this production were the director’s regular partners designer Bianca Adjic Ursulov and composer Sasha Carlson.

Galin Stoev about “The Triumph of Love”:

“The Triumph of Love” with Russian actors

From the professional point of view this is an exceptionally interesting project for me. On the one hand the text of “The Triumph of Love” contains the intellectual play and the lightness of the French spirit that is part and parcel of the Enlightenment. It was that incredible moment of the man decided that everything, from Universe to God”, could be explained in rational terms… On the other hand here we deal with the Russian actor and his unique sensitivity and strong reliance on emotions that reflects the metaphysical mystery of the unexplainable. Senses prevail over sensibilities.

What is this play? Basically it is written against all the rules of drama. Already in the opening scene the heroine enters and explains what she is up to, what she is going to do and what way out of the situation she sees. Afterwards everything she has said is enacted right in front of us and it all ends precisely as she has planned. But this is true only as far as the sequence of the events is concerned. Here everything is perfectly predictable. But what happens to the characters as they are making their ways through the labyrinth of the emotions? Nothing is said on this account. We’ve got some lines, some reactions but basically we have no idea of what is happening to the man in the course of the experiment: what erosions and destructions begin, when the hope arises and at which point it dies; and in which moment the abyss of passions is going to open wide?

This is also a story about the power of the spoken communication. It is an experiment with the language. It demonstrates how the invisible matter of words can produce visible objects, the real world. A declaration of love, no matter if it’s false or true, starts to produce objects, feelings and characters.

Marivaux’s characters tend to appear before us and before each other wearing masks. The exchange roles: servants start playing masters and masters appear as servants. In “The Triumph of Love” they change their sexes. Two girls put on boys’ clothes and keep wearing them throughout the play. Deception seems to be an inalienable component of his plays. The true nature is always hidden behind a mask which in point of fact is the nature of every masquerade and every theatre performance. The mask is the vital instrument for people to know each other because when you are wearing a mask you have much greater freedom than the real “you”. But in the end of the play the Queen has to stop being Fokion and return to her real life. And this moment contains a tragic paradox. The play is over but how to live outside the play? It’s a big question. So on the one hand Marivaux’s play contains this distinctive “lightness of being” but on the other hand it is precisely this lightness enables the author to bring out some fundamental truth about human nature. Indeed this Marivaux is a very strange author…