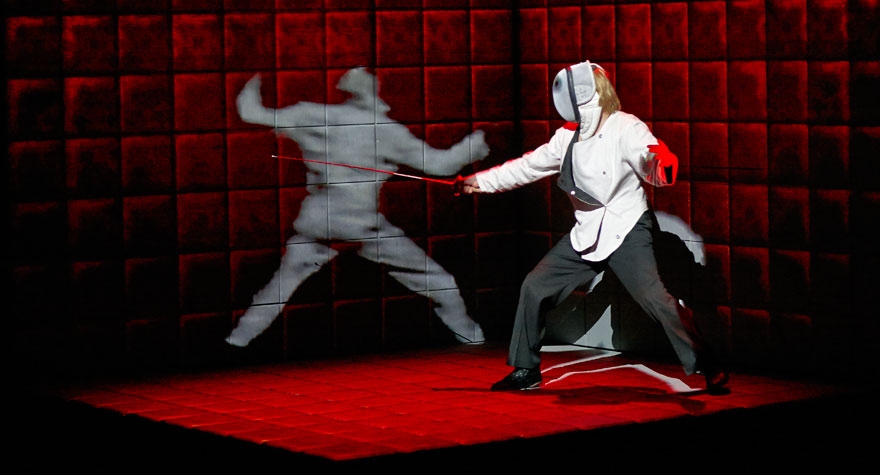 The performance is about a person who faces his own consciousness. All roles in Shakespeare’s tragedy are played by Evgeny Mironov.

A wide range of state-of-the-art video technology methods are used in the performance. At the centre of the stage arrangement there is a specifically programmed composite cube.

Hamlet | Collage is the largest joint cultural project between Russia and Canada, and also the first Robert Lepage’s performance in Moscow. People all over the world are familiar with the works of Robert Lepage - The Far Side of the Moon, The Andersen Project, Lipsynch, Kà -a famous show by Cirque du Soleil, and many others. Robert Lepage accepted the offer to stage the performance in Moscow after he met Evgeny Mironov personally and visited the renovated building of the Theatre of Nations.

Robert Lepage: “Hamlet’s main problem is that he thinks too much. He doesn’t find a solution to a task. He is a character who always uses his brain. All in all, a skull serves as a powerful symbol of the theatre and Hamlet. That’s why Shakespeare has devised a big scene with a skull, which after all is a human’s head. I surely don’t have answers to my numerous questions. That’s why it was interesting to stage a play with a single actor, with the actor’s head”.

- laureate of the Snob magazine's Made in Russia award

This Hamlet does not have dual, but multiple personality. All the characters in the play are just phantasms. They have been born in the disordered mind of an awfully lonely person who is the only inhabitant of the floating in the Universe cube planet with a swept-away roof. It is insecure, unstable, slanting to the ground, and Hamlet is constantly on the verge of falling into some space abyss. More truly, it is Evgeny Mironov who plays all parts - one for all – who risks falling down.

Mironov, as mentioned in Shakespeare’s texts, plays the man in many guises. It is said in the play that “the purpose of art is to hold a mirror up to nature”, however the man himself is a mirror of the world he lives in. In the disintegrated world the man is disintegrating as well. His mind is perplexed and torn, and the man himself is like a broken mirror.
"Personality multiplication". Marina Timasheva. SCREEN AND STAGE

Evgeny Mironov is bound to be remembered as the theater’s best Hamlet of our non-hamlet time. Needless to say that among other Moscow productions the Hamlet of the Theatre of Nations is perceived as a true masterpiece of theatrical art.
"Hamlet in the supercube". Alexey Bartoshevich. COLTA.RU

It is basically a matter-of-fact production of the forgotten concept of monodrama developed by Nikolai Evreinov, who stated that every stage action illustrated the processes happening in one person.
"Hamlet | Collage". Alexey Kiselyov. AFISHA

A miracle has happened in the Theater of Nations. The play Hamlet | Collage staged by the eminent director Robert Lepage has become an unprecedented event in the history of the Russian theater. Evgeny Mironov - the artistic director of the Theater of Nations - has managed to create something a lot more than just a good performance. Having invited Lepage to direct the production and by playing all the parts by himself in his two-hour performance Evgeny Mironov has taken off into space.

The Theater of Nations has clearly shown what contemporary art can be like if you put not only talent and money in to it but also hard work, diligence and competence. This lesson of hard work is vital for our home tradition where spontaneity and spontaneous genius are in favour. I wish this lesson would be learnt.
"The lesson of hard work". Alyona Solntseva. MOSKOVSKIYE NOVOSTI (MOSCOW NEWS)

Lepage and Mironov bring us back to the origins of Shakespeare's theater and the ancient theater in general where such transformations were the most important and promising tool, and naive audience would exclaim - Ah! When butch Laertes is giving instructions to his sister Ophelia, and just a second ago we saw loyal Horatio, and another two minutes ago there was a devastated mentally disordered Hamlet – you begin to feel the completely forgotten theatrical pleasure: he is transforming, he is all sorts!
"To be or not to be? No questions. Natalia Kaminskaya". PETERBURGSKY TEATRALNY ZHURNAL (PETERSBURG THEATER MAGAZINE)

The trouble is that after reading volumes by Shakespearean scholars and watching all the films, finding new meanings in the well-known text (the translation by Lozinsky is combined with Pasternak’s so that Mironov does not use any hackneyed phrase and intonation in the performance), this hipster-prince never found a way out. That’s pretty much the main thing Lepage is telling us this time: a modern man who has learnt to overcome the Earth's gravity, but unable to tame the fate.
"Hamlet in the cube. Yevgeny Mironov in Robert Lepage’s performance". Alla Shenderova. KOMMERSANT

Lepage’s performance looks like a visual adventure, like an infinitely changing installation with the most interesting moments of the play occurring right when the actor becomes part of this imaginative space.
"Hamlet | Collage by Robert Lepage at the Theater of Nations". Anna Banasyukevich. TEATRALNYE DNEVNIKI (THEATER DIARIES)

Mironov manages to merge with a complex set as if it were part of him. The actor fully masters the mysterious space. The space changes and Hamlet puts on a wig and turns into Gertrude, glues on a beard and performs a monologue as Claudius. He clowns around at times or rises to the heights of seriousness - the range of the actor’s expressions is as wide as the director’s idea. The versatile nature of acting is another idea of the production.
"He knew too much. The Theatre of Nations premiered a much-anticipated performance Hamlet | Collage starring artistic director". Anna Chuzhkova. KULTURA NEWSPAPER (CULTURE NEWSPAPER)

It is striking how often Lepage shows not just technology but the beauty of the idea. The three open-side cube is hanging above the stage. Evgeny Mironov is living in the cube. He is Hamlet, Gertrude, Horatio, Claudius, Ophelia, Laertes, Ghost, Polonius, Osric, Rosencrantz and Guildenstern. However at the beginning and at the end of the 135-minute play his character is called simply the actor. He is wearing a straitjacket. He is locked up in a prison of his imagination.
"Hamlet | Collage by Robert Lepage: The Prince has taken the cube out of his head". Oleg Zintsov. VEDOMOSTI

Certain episodes of this Hamlet cause bewilderment even if you are a hundred times ready to see the acting talent that Mironov possesses. Who else but him could jump easily out of a dashing guise of Laertes into Ophelia's sad character. It is obvious that without the help of an assistant mentioned in the brochure the whole thing couldn’t be done. However there is not only acting skill in this jump, but also the illusionist competence at the similar level to David Copperfield’s: he is actually doubling!
"Evgeny Mironov cubed Hamlet". Vadim Rutkovsky. SNOB